“The report seemingly details the possible future of foldable phones, and claims that it will grow significantly by 2022”

Samsung is possibly going to be the first mainstream company, or even the very first altogether, to launch a smartphone with a foldable display. The company has been working on this new technology since ages and recent reports have suggested that the company’s efforts have finally matured into something concrete (but flexible, of course). Now, a recent report by a Korean market research group has seemingly detailed how it sees the foldable smartphone industry to evolve in the near future, and that has included a few interesting bits of details about Samsung’s foldable smartphone, dubbed the Samsung Galaxy Fold.

The report claims that the Samsung Galaxy Fold will feature two batteries in two parts of itself and this combined will produce total battery backup of 6,000mAh. Alongside this massive battery stamina rating, the Galaxy Fold will possibly be powered by the Samsung Exynos 9820 SoC and the Qualcomm Snapdragon 855, depending on market. It is also expected to get 8GB of RAM and 128GB native storage. The only bit of the claim that seems unlikely is the dual-camera arrangement — Samsung has already been moving to triple camera and quad camera arrangements in its phones, and as such, it is highly unlikely that it will equip its flagship novelty of a device with a meagre, 12MP+12MP camera arrangement. 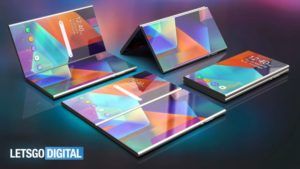 For all its novelty, the Galaxy Fold is also set to be a very expensive smartphone, which we have reported previously. Samsung Display, a subsidiary of Samsung Electronics, is also said to lead this segment of foldable OLED displays going forward, and while it aims to hit production of one million foldable OLED by next year, LG Display, its prime competitor, will not hit this figure until at least 2020.

Incidentally, Samsung, LG, and Huawei are expected to be the among the first companies to launch foldable devices, within the first half of 2019. The Chinese trio of Oppo, Vivo and Xiaomi are likely to follow suit by end-2019. For fans of Microsoft and Apple, the report does not expect to see foldable Surface and iPhone devices until at least 2020.

Yahoo Messenger is shutting down on July 17, redirects users to...

Tec Ground - May 27, 2018 - 10:23 AM
0
Whoever said that history repeats itself was seriously onto something. In the past couple of years, we've seen the resurgence of things we've enjoyed...

The company’s new “keyboard service program” for the troubles assailing some...

Tec Ground - June 24, 2018 - 11:51 AM
0
Apple is finally taking some responsibility for the troubles assailing some MacBook and MacBook Pro owners with broken keyboards. The company's new "keyboard service program"...