The past couple of years have been good for gaming laptops. They’ve gotten lighter, thinner, and ridiculously more powerful. But while all of those advancements have been extremely welcome, most gaming laptops are still heavily compromised for non-gaming activities. They tend to have worse keyboards, bad trackpads, and battery life that’s too short to really make them practical away from an outlet for any stretch of time. That doesn’t even go into the fact that most are adorned with obnoxious lighting effects, garish logos, and styling that would make a Gundam blush.

Of all the gaming laptops on the market, Razer’s Blade 15 is perhaps the closest to straddling the line between a powerful gaming computer and an everyday machine. So when it came time to evaluate the latest refresh, which includes Nvidia’s RTX graphics cards, I got my hands on the most conservative-looking model I could get: an entry-level Blade 15 Advanced in the “Mercury white” color scheme that sells for $2,349.

While this Blade 15 is certainly a capable gaming laptop, it also looks the part of a more traditional computer for productivity work; most people wouldn’t even guess that it’s a full-fledged gaming laptop when they see it. But as I’ve learned by using this computer over the past few weeks, a great everyday laptop needs more than just good looks. 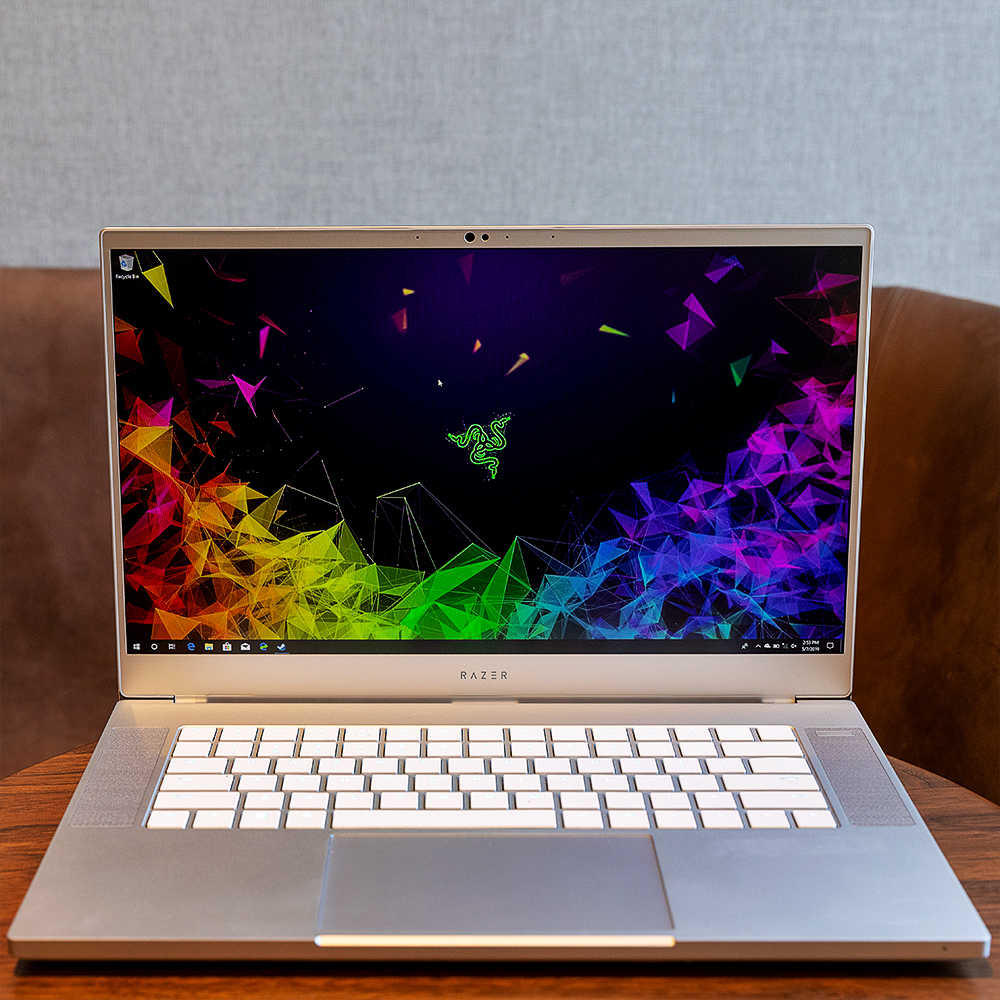 This year’s version of the Blade 15 Advanced has the exact same design as the model that debuted last year. Its aluminum chassis has sharper edges and a more squared-off appearance than prior Razer laptops, and it has a very small footprint for a 15-inch gaming laptop. At 0.7 inches (17.8mm) thick and 4.56 pounds (2.07 kg), the Blade 15 Advanced is compact and light enough to cart to the office and back every day without much of a burden. You’ll feel the hefty 230W power brick in your bag, however, and you’re not going to want to really travel without it, as I’ll get into later.

The Mercury white version (which is really just a light silver) is a little more understated than the traditional matte black Razer laptop. It trades the glowing three-headed snake logo on the laptop’s lid for an unilluminated version, and the finish is far less prone to picking up fingerprints than the black model. This is the only gaming laptop I’ve used that doesn’t scream “I’m a gamer!” in its design, and it’s the only one that isn’t embarrassing to use in front of clients or executives. The silver color carries a $50 premium over the standard black, which I don’t fully understand, given it drops the illuminated logo, but if I were already spending this much on a laptop, I’d probably spring for it anyway.

While most gaming laptops have subpar build quality, the Blade 15’s chassis is tight, with no real issues to speak of. It’s a solidly built computer that can hang with the best from Apple and Microsoft in terms of fit and finish.

Gamers, of course, are far more concerned with what’s inside that chassis, and the Blade 15 Advanced’s gaming chops are impeccable. The model I’m testing has a six-core Core i7 8th Gen Intel processor, 16GB of RAM, a 512GB SSD, and an RTX 2060 graphics card. The 15-inch 1080p matte display has a 144Hz refresh rate and covers 100 percent of the sRGB spectrum. As we’ve seen in other gaming laptops with these specs, the Blade 15 Advanced can push most modern games well over 60 fps with all of their graphical settings maxed and will reach over 100 fps in less-demanding titles. Given the high price tag of Nvidia’s RTX graphics cards, the 2060 provides the best balance between value and performance in the lineup and most gamers should be very happy with its capabilities. Should you want more power, the Blade 15 Advanced can be equipped with up to an RTX 2080 Max-Q card and a 9th Gen Core i7 processor.

While gamers are often willing to make significant sacrifices in usability to attain the best possible gaming performance, evaluating a laptop for productivity and creative work requires a different set of benchmarks. That is where the Blade 15 Advanced starts to falter.

Let’s start with where the Blade 15 excels. It may be obvious, but the Blade’s gaming-level components make it basically overkill for any productivity or web-based work. I can run as many tabs as I want across as many virtual desktops as I want and switch between them all without the machine ever skipping a beat. Content creators can leverage the Blade’s GPU to accelerate video and photo processing to cut down on how long it takes to complete those tasks.

Similarly, the high-refresh rate screen is unnecessary for non-gaming work. But that doesn’t mean it isn’t greatly appreciated. Everything from cursor movements to scrolling is just so buttery smooth on the Blade 15’s screen that even though I don’t game often, I want this kind of screen on every device I use. It’s also plenty bright enough for use in office environments, coffee shops, co-working spaces, or anywhere else you might need to do work.

The Blade 15 has other creature comforts that make working on it more pleasant, like its abundance of USB-A ports and video outputs that allow me to leave all of my dongles at home or the Windows Hello-compatible webcam that lets me log in without having to type a password. The speakers are loud and clear, which is great for taking calls from the laptop.

But while the Blade 15 excels in some areas, it disappoints in many others. The speakers may be loud, but they have to be in order to drown out the laptop’s fans, which are a constant companion at the laptop’s default settings, even when I’m doing relatively “light” work.

The Blade 15’s keyboard looks fine at first glance, with its per-key backlighting and spacious layout. But even with weeks of using it, I could never become accustomed to the shallow travel of the keys, or the frustrating placement of the arrow keys. I’m constantly selecting text when I intend to type a question mark because the up arrow is to the left of the right shift key, where the forward slash / question mark key is on every other keyboard. It’s not a keyboard that I enjoy typing on, and typing words is a huge part of my workday.

The Blade’s glass trackpad is smooth and spacious and supports multifinger gestures, but it has poor palm rejection, which causes the cursor to jump around the screen erratically whenever I type.

Lastly, the real deal-breaker to using the Blade 15 as an everyday laptop for me is its very poor battery life. Gaming laptops have never had great battery life, with even the best options hitting just five or six hours between charges. The Blade 15 isn’t even that good: with my standard workflow of browsing the web, using Slack, checking email, writing Word documents, watching YouTube videos, and the occasional video chat, the battery lasted an average of three hours between charges across the weeks I’ve been testing the Blade, a far cry from the “up to 6 hours” Razer advertises. (That’s with the display set to about half brightness and Windows 10’s power slider set to better battery life.)

Most gamers would not take issue with any of the things I’ve pointed out, but when Razer is charging as much as it is for the Blade 15 lineup, it’s not unreasonable to expect a little more from the machine. After all, if performance was the only thing I was concerned about, there are plenty of other gaming laptops out there that match or exceed the Blade 15’s performance and do it with even lighter designs and much lower price tags. Even Microsoft’s Surface Book 2, which is more of a regular computer that can also play games as opposed to a gaming laptop that can also do work, offers a bit more bang for the buck than Razer.

So while I love the looks of the Blade 15 Advanced, especially in the Mercury white finish, and I adore the power on tap and the buttery-smooth display, it’s not a computer I can really recommend for anything other than gaming.

Instagram stories are getting soundtracks,Add some music to your posts

Tec Ground - June 29, 2018 - 11:09 AM
0
Instagram Stories are about to get even busier, with the addition of licensed music. Starting today, users will be able to add background music...

Tec Ground - July 8, 2018 - 9:53 PM
0
In another move to put a stop to the circulation of spam on its platform, WhatsApp is working on a Suspicious Link Detection feature....

iOS 12 is all about speed and performance