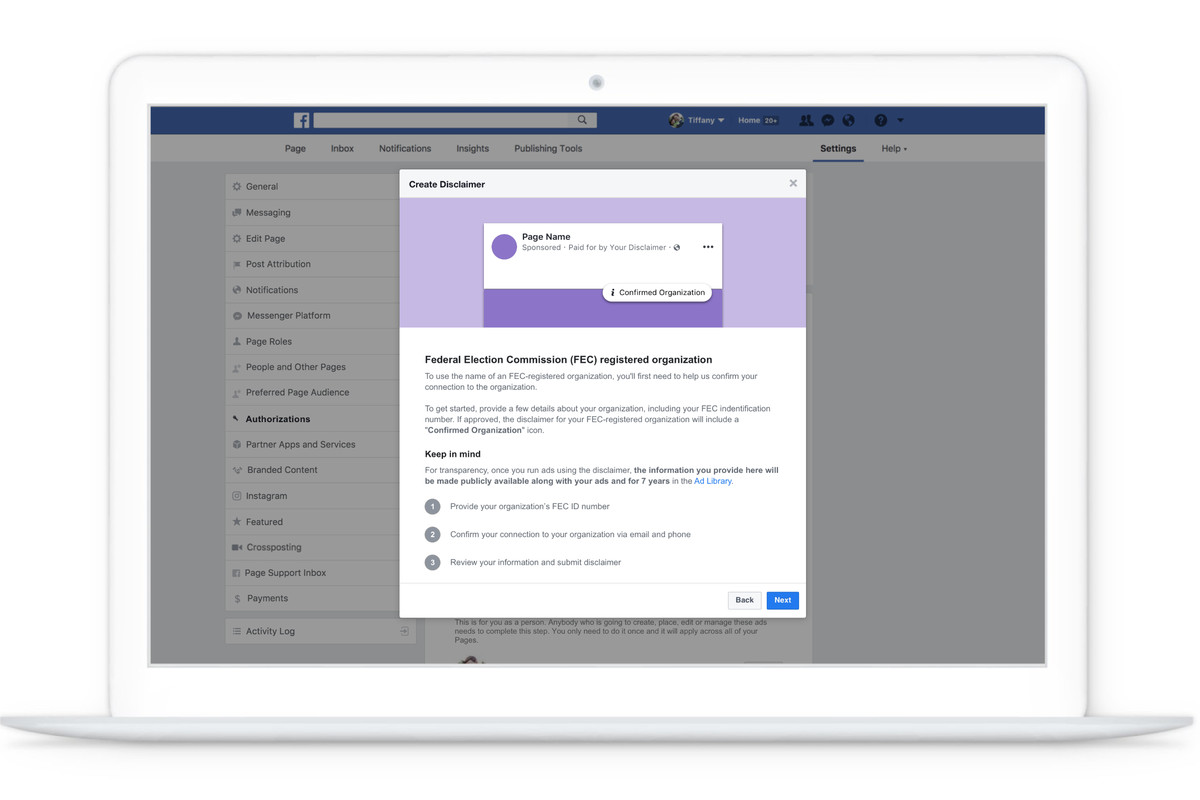 Facebook is adding new requirements for political advertisers, the company said on Wednesday, as part of its efforts to make the platform more secure in the run-up to the 2020 election. Before buying a political ad, advertisers will need to provide more information about their organization, including government-issued identification numbers. The move, which will take effect in mid-September, comes in response to some advertisers using misleading names in their disclaimers in order to disguise their identities.

“In 2018 we did see that our disclaimer process was something that could be misused,” Sarah Schiff, a Facebook product manager, told The Verge. “This is an effort to strengthen that process.”

Today’s changes mark an evolution in the political ad disclosure requirements that Facebook introduced last year. Beginning last spring, the company began to require anyone buying political advertising to verify their identity and location. Now they will have to go a step further, offering proof they’re part of the organization they say they represent.

For commercial businesses, nonprofits, and nongovernmental organizations, that will mean providing a tax-registered organization identification number. Government and military advertisers will have to provide a web domain and email address that ends in .gov or .mil. Political action committees and parties will need to provide their Federal Election Commission identification numbers.

In exchange for providing that information, organizations can use their name in ad disclaimers. An “i” icon in the upper right-hand corner of the ad will show that they are a “confirmed organization.” Clicking that icon will reveal additional information about the advertiser, including their government ID number.

“While the authorization process won’t be perfect, it will help us confirm the legitimacy of an organization and provide people with more details about who’s behind the ads they are seeing,” the company said in a blog post.

Facebook is also making it possible for smaller organizations and local politicians to buy ads. They are asked to submit a name, address, website, email, and phone number for the organization, which Facebook will verify. They can also choose not to submit information for their organization, but in that case they will not be able to use an organization’s name in a disclaimer.

In addition to the new ad requirements, Facebook is also updating the categories of advertising it considers political. What had been 20 subject areas has now been consolidated into 10 categories, which Facebook says are more inclusive. At the same time, Facebook says it is working to be less restrictive — ads that promote recycling will no longer require advertisers to verify their mailing address, for example.

The move comes after some advertisers complained that the system was preventing them from buying ads without going through the more onerous registration process, even when the ad had no real political angle.

Facebook said the new rules would take effect in mid-September. If advertisers have not submitted the required information by mid-October, their ability to buy ads will be “paused,” the company said.

Tec Ground - June 11, 2018 - 3:16 PM
0
FromSoftware’s bizarre cult hit is getting an update and U.S. release on PC, XBox One and PS4 At their Sunday night press conference, Devolver Digital...

Tec Ground - September 9, 2018 - 7:49 PM
0
Instagram has added personalized emoji shortcuts to its app, placing your most used emoji above your keyboard when you begin to comment on a...