Facebook Dating is now a reality. Four months after announcing that it would add dating features, the social network said today that it has begun testing its new dating product in Colombia. At first glance, Facebook Dating closely resembles competitor Hinge. Both depart from the swiping model popularized by Tinder in favor of asking users to answer question prompts and start conversations based on something in a person’s profile. What sets Facebook Dating apart is its integration with Groups and Events, drawing on other aspects of Facebook to expand the dating pool and encourage users to meet in public.

“Dating has been a behavior that we’ve seen on Facebook for a really long time,” product manager Nathan Sharp said in an interview with The Verge. “We want to make it easier and more comfortable for people to engage in. We just thought that now was the right time.”

Facebook Dating lives entirely within Facebook’s mobile app. It won’t be available on desktop for now, and to find it, you’ll have to tap into the hamburger menu (☰). It’s available to users 18 and older, is free to use, and doesn’t include any ads or premium features for now. You won’t be part of Facebook Dating unless you opt in to use it. If you do, you’ll be asked to create a separate dating profile that includes a much more limited amount of personal information about you. 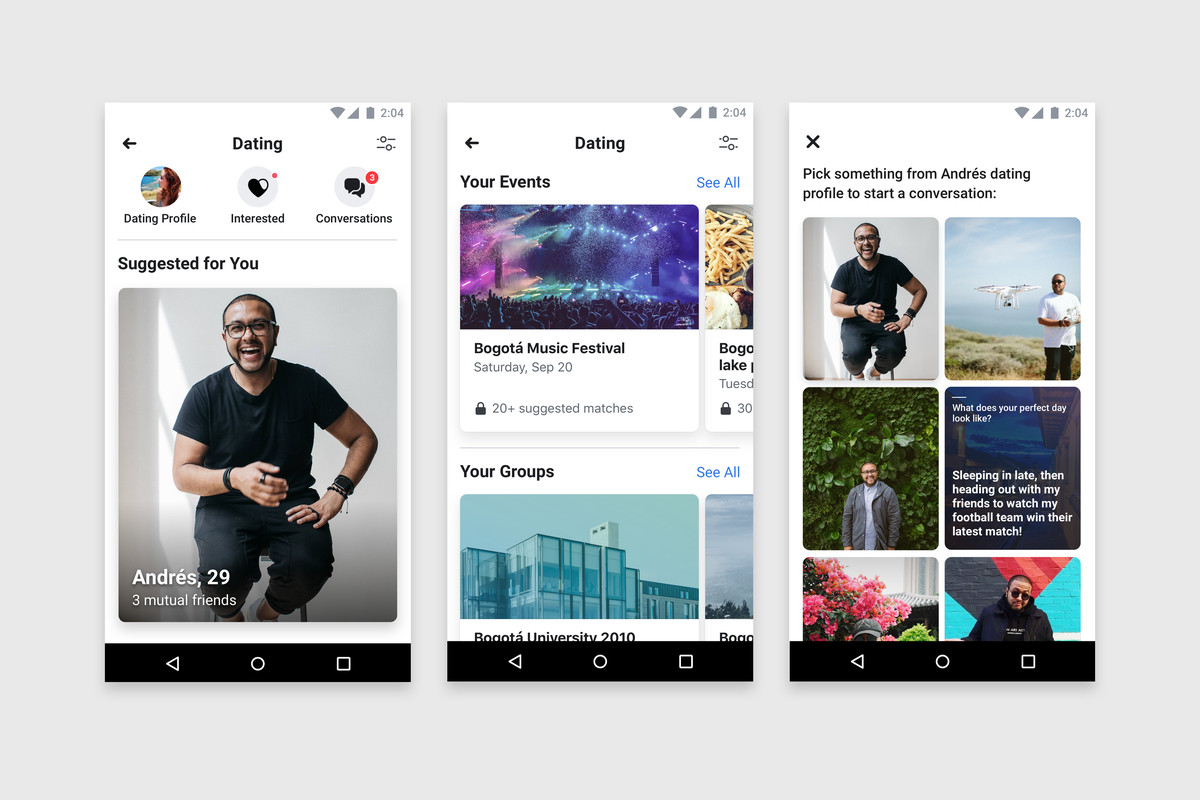 Only your first name and age are carried over from your Facebook profile, giving you some measure of privacy. When you create your dating profile, you’re asked to write a short introduction to your profile that describes who you are and what you’re seeking.

Your dating profile includes a mix of photos and answers to Facebook’s question prompts, such as “what does your perfect day look like?” You can include up to nine photos and answers on iOS, and 12 on Android. The photos can come from your camera roll, Facebook uploads, or Instagram photos that you’ve cross-posted to Facebook. As an effort to thwart catfishing attempts, you will also have to input your location, which Facebook will verify through your phone’s GPS.

You can browse for matches within 100 kilometers. (Colombia uses the metric system!) Unlike some other apps, you won’t be able to change your virtual location to browse for matches elsewhere. Instead, if you’re visiting a new place, you’ll have to verify your location again within Facebook Dating.

Once you start browsing, Facebook will exclude your existing friends from your pool of matches. Instead, you’ll only see friends of friends or people to whom you don’t have any connection at all. If you’ve blocked someone on Facebook, they will also be excluded from the dating pool. But if you’ve unfriended an ex, that person could still show up in Facebook’s match suggestions.

When searching for matches, the company takes into account signals like your location, shared page likes, similarities between your Facebook profiles, and mutual friends. When browsing, you’ll see a selection of people you can “express interest” in by tapping a photo or an answer to a question prompt. Like Hinge, you can then add a note and send it to the person you’re interested in. The recipient can then either send a message back or ignore it.

Unlike apps like Tinder, which require you to match before chatting, you can send a message to anyone. If they respond, a new chat thread will open in a separate part of the Dating feature. Your messages are limited to text and emoji; there are no photos or videos in Facebook Dating messages. To accomplish this, Dating uses its own messaging interface, not Facebook Messenger.

Facebook says its goal is to promote actual conversations between people. Sharp said the company is focused on promoting meaningful relationships over hookups, but he acknowledged that hookups are as likely to happen on Facebook Dating as on any other dating app. You can express interest in up to 100 profiles per day, but you can send an unlimited number of messages to people you’ve already matched with.

You can expand your dating pool by using Facebook Groups and Events. If you’re part of a Group where you expect to find good matches — a popular campus group for sharing memes, for example — you can opt in to showing your Dating profile to members of that group. The same goes for Facebook Events, where the feature is enabled for both upcoming and past events. (If you had a missed connection at Coachella 2014, now’s your chance to have that storybook romance.)

Facebook isn’t the first app to experiment with dating based around events. Coffee Meets Bagel, for example, recently paired up with Sofar Sounds to host live concerts where its users can meet in public. Tinder also announced Places this summer, letting users browse potential matches based on where they mutually go.

Facebook is used by 2.2 billion people, and it seems likely that some segment of the user base would welcome a chance to date on the platform. The question is whether it becomes popular with the young, photogenic audience that features in all of Facebook’s promotional product photography, or the larger, older Facebook audience that might never have tried online dating at all.

Ripped-off Hinge features aside, Facebook’s approach is conservative to the point of being tentative. (Having withstood several revolts over privacy, some of them quite recent, Facebook’s caution is warranted.) As it currently exists, Dating is walled off from nearly everything else inside Facebook and hidden behind a hamburger menu, to boot. It’s so isolated it’s not entirely clear why Facebook built it into the flagship app to begin with.

At the same time, this is only a test. Facebook often experiments with new features and apps for a year or longer as it searches for a winning formula. If Dating takes off in Colombia, it could be promoted to a more prominent place within the app, or even to an app of its own. “Our goal is to make Facebook the single best place to start a relationship,” Sharp said. It could get there eventually — but it will need to evolve along the way.